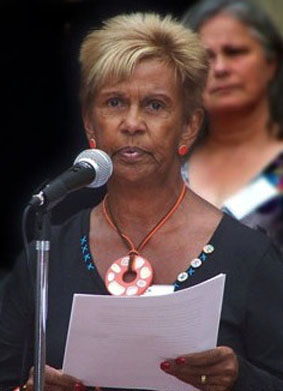 I would like to acknowledge the Traditional Owners of the land we are standing on, the Wurundjeri people, and I also pay my respects to all Elders past and present.

I was invited to speak this morning by the Nillumbik Reconciliation Group, a group of people dedicated to improving relations between our Aboriginal and non-Aboriginal people of Australia and I am happy to say I am a very proud member of this group.

I have thought a lot about what today is about. I am Aboriginal and I am Australian so what do I have to celebrate about Australia Day? What does Australia Day mean to me and my people?

For a long time Aboriginal people were very bitter about Australia Day. Australia Day was originally used to celebrate the invasion of our lands and the destruction of our many cultures. Australia Day meant that our history in this country was disregarded and our culture denigrated, we became the invisible people. No one cared about us and it was only through our sheer resilience and the strength of our culture that we survived those terrible times.

This year marks the 75th Anniversary of the Day of Mourning, a protest organised by the Aboriginal Progressive Association against the injustices surrounding the treatment of Aboriginal People in Australia, held on 26 January, 1938.

So, we could never celebrate the colonisation of this country, to do so brings dishonour to our ancestors and their valiant fight to protect our lands.

In that speech he paid tribute to the way in which the nation had been built but pointed out that a large gulf existed between white and black Australians. As I mentioned before, back then Aboriginal people were treated as second class citizens, lived on the edges of the towns and cities and faced horrible discrimination and racism.

In the 55 years since then the meaning of Australia Day has changed, as have the people of Australia. We are not the same nation of people. A variety of other cultures has since made its home in this beautiful country of ours.

According to the Australia Day website, today is about us, coming together as a nation, “to celebrate what is great about Australia and being Australian. It’s the day to reflect on what we have achieved and what we can be proud of in our great nation.”

Aboriginal people have always known what a wonderful country this is: the land has nurtured us for thousands and thousands of years and despite what has happened in the last two hundred years our relationship to the land and to one another has never changed. As for reflecting on what we have achieved I think most of us in my community congratulate ourselves for surviving another year.

I think that Australia Day should be about respecting one another’s differences and acknowledging the many different people of this country. We should be proud of who we are – whether we’re Aboriginal, whether we were born in this country; or whether we have adopted this country as our home.

We need to celebrate the mix of backgrounds, histories, cultures, religions, values and beliefs. And we should be proud of how we have embraced the different cultures of the world and not be frightened about any of them.

I would like to mention that there is a statue of my parents in Parliament Gardens next to Parliament House. When this statue was unveiled it was a very proud moment for our family and the Aboriginal people of Australia.

My father would be very happy to see how far this country has come in relation to its treatment of our Aboriginal people, but he would also point out that there is still much more to do to completely fill in the gulf that still exists between Aboriginal and non-Aboriginal people.

I would like to leave you with a quote from my father:

“We want to walk with you, we don’t want to walk alone, all we want is to be able to think and do the same things as white people, while still retaining our identity as a people.”

Happy Australia Day, and thank you. 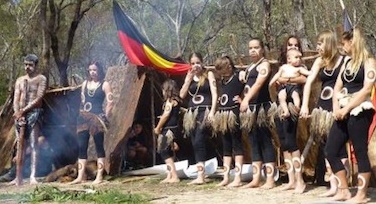